One BIG Lap, Stage One, The Mountains.


Stage 0ne, The Mountains.
Even taking into the early start, it was cold, the coldest day since we arrived, and no sign of a nice sunrise over the bay with the cloud so low and dark. Setting off with gloves, knee and arm warmers was definitely a good move. The cap and gilet worked well too, and there was still the cape in my pocket if the forecast’s small chance of rain made a show. The forecast had also said, however, that the sun would come out around lunch time with the south westerly wind picking up at the same time. I hoped that would mean the full looking clouds would have blown over before I got to the mountains as I really didn’t fancy getting stuck up one all cold and wet.


The road to Old Town Pollenca was busy with work traffic and, unsurprisingly for the daft, cold hour, there was no sign of any riders. The wind was only light and I hoped I’d manage the long mountain stretch to Andtrax before it changed. From there, the mountains would actually shelter me much of the way so all seemed to be conspiring in my favour. Having stayed in different parts of the island, I knew the whole route in chunks. The first part to Valldemossa, and the last part from Porto Colom, was fresh in my memory after having stayed in Puerto Pollenca a fair few times over the last few years. It’d been a while, however, since I’d ridden the roads on the far side of Palma and they turned out to be much harder than I remembered them.


I was riding without power on the Pinarello Experience F10 which was a bit strange after using power with Zwift and my Wahoo Kickr. I did have a heart rate monitor, though, which meant I could be confident in my pace without going into the red, and that I’d get back before it got dark if I kept to between 120-130bpm as much as possible. This generally means a comfortable pace for me and something I was well practised in as it features a lot in my hour sessions before breakfast. I was less confident about keeping it up for over ten hours, the time I’d reckoned on when Nicola and Mollie had asked me how long I’d be out. I like to think they were asking for safety purposes, but maybe their reason was more to do with how much shopping time they had together in Palma before I got back!


Once past Old Town Pollenca the roads went deathly quiet; I didn’t see even one car as I headed towards the first climb of the day: the Coll de sa Feminia. On the Feminia, I settled in to a nice easy rhythm, trying to hold back for the mountain road to Andratx and the long hours ahead.  Everything felt comfortable and quite leisurely compared to shorter rides; there was no need to stamp on the pedals at all. Moving onto the rolling roads over the top of Lluc, there’s even chance to do a bit of freewheeling. Not a lot but enough to sweeten the ascent, and from the Lluc/Sa Calobra junction, the road climbs again, steadly with a few downhill sections to recover. It was on one of these down hills that I had my first planned bit of food: half a cheese and ham roll. At the pace I was going and only an hour and half after the porridge, I knew I wouldn’t be digging to deep into my energy stores.


The first bit of real wind of the day came as I headed into the tunnel and out to the Cuber reservoir towards the highest point of the day. Toward the second tunnel at the top of Puig Major, a few spots of rain came as I rode past the reservoir.  Blue sky was breaking though the sky, however, and I was more and more hopeful that I’d remain dry, despite it still being chilly.


Finally, I made the tunnel at the top of Puig Major after two hours (42km) of riding, mostly climbing. The other side of the tunnel saw the longest downhill of the day, with almost 15km of freewheeling to the Port de Soller, and here was my second chance to eat the other half of the cheese and ham roll. I love this descent, especially on mornings clear of traffic, and only at this point did I see my first fellow bike riders, who were climbing up the Puig the other way. Reaching the bottom brought welcome heat as the sun came out, just in time for one of my favourite bits of road. 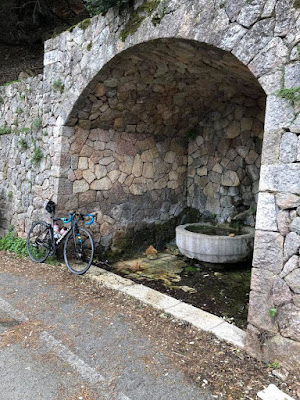 The route from Soller to Valldemossa through Deia tails the coast, offering up some amazing views out to sea, and climbing out of Soller was the first time I’d actually felt hot since setting off. The road to Deia climbs a bit then rolls into the village, and with the sun still burning through the clouds, my first planned water stop a road-side water fountain couldn’t have been better timed. I’d found the fountain three days prior on the 200km ride I’d done, when the warm weather had prompted me to take on more fluids than usual. Today, though, because it had been cold, I hadn’t drunk much - just one and half 750ml bottle up to this point. Still, I drank, topped up with fluids and polished off a banana before setting off for the decision point: either left for the short route home or right for the full lap. If I’m honest, I think I’d have struggled to bail out now and it was probably only ever going to be one way, not least because the seven or so hours left of riding (230km) didn’t feel quite real, a sensation that was partly down to not actually remembering the next leg of the ride. 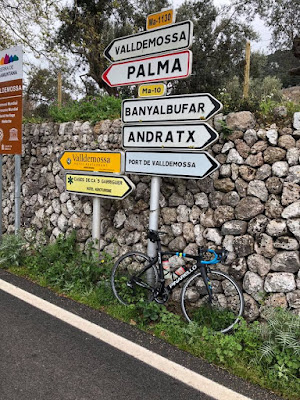 From Valdemosa onwards, things were definitely getting vague and misty with old age, and I’d totally forgotten how hard the road to Andtrax was. In my head, there was only one climb and the twenty years since I’d ridden it had flattened it out a bit. The one steady climb, however, turned out to be four short climbs that were really quite tough!  That said, the road that traces the coast down towards Andratx is fantastic, with more great views out to sea. I did have a bit of a panic attack after Banyalbufar when I thought I’d missed a turn, which meant I was going an even longer way round the island. I’d sort of convinced myself, though, that I wasn’t and carried on anyway, pushing down another half of a cheese and ham roll to take my mine off things. Seeing Andtrax after four and three-quarter hours (115km) was certainly a relief when I realised I was ok and still en route. 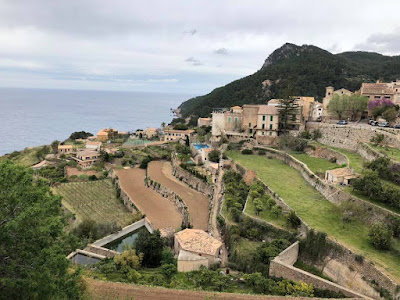 The road from here took me back into the mountains for one last time and onto the road to Calvia. Progressing towards Palmanova, the scenery ends for a while, unless you count the crowds of still half-cut Brits wobbling between one pub and the next. At this point, in terms of time (five and half hours of riding), I reckoned on being about half way, and that I still had about 180km to go. My spirits were still high, the legs still felt okay and I was more than happy with the way the weather was turning out. The forecast had been right and the wind had picked up in a south westerly direction, meaning I’d get the anticipated tail wind for a good chunk of the mixture of flat and rolling route to home.... 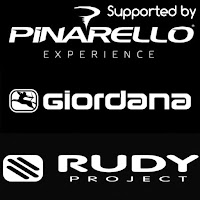 Popular posts from this blog

Bike fitted and made custom footbeds for World and National Champions.

After 40 years still in love with the bike and still learning.

- May 08, 2019
Having my bike set up properly is a revelation, free power and a much comfier ride from the same bike. If you're thinking of going retul don't bother, Adrian is obviously massively knowledgeable and very humble. I've also found the footbeds that come as part of the bike fit have got rid of all the hot spots that were building up in my shoes after a few hours of riding.
Highly recommended and worth the wait.

- October 08, 2017
Bike Fit or New Bike or Surgery Bike Fit or New Bike or Surgery
Dear Adrian
Thank you very much for my bike fit last friday, despite your   shoulder troubles. My hope from a bike fit was to reduce the   stress that my unstable wrists were under and hopefully negate   the need for surgery in the future The early results of the bike   fit have far surpassed any expectation and I only wish that I had   seen you some 5 years earlier. I have now been out on 3 separate   occasions since last friday. One long slog in the Pennines, an   hours full speed blast and a long easy spin. During and since   these outings I have not experienced any wrist, neck or shoulder   pains; all of which I would have normally experienced- up to   the day of the consultation.
Previous advice from a bike shop had led me to believe the frame   I have was too big for me and suggested I have my saddle in a   maximum fore position. This led to negative feelings about the   bike and a desire for a new frame. The fact that the bike hand…
Read more